OakParkApartments.com’s property located at the corner of Elmwood Avenue and Lake Street, has raised some serious architectural questions over the years. Present day architects and historians believe that this property might be designed by famed Oak Park architect, Frank Lloyd Wright.

Frank Lloyd Wright is pretty well known and not one to shy away for claiming his designs so why the difficulty in determining who this building architect was? Well, back in 1913, when a building permit was being applied for, the Village of Oak Park did not ask who the architect was for a particular building as part of the permitting process.  It was not until 1919 that the Village changed its’ rules and began requiring an architect’s name as part of the permit approval process.

What OPA has determined through a bit of sleuthing is a bit of information about the building’s contractor, Henry Hogans. He was a prominent Oak Parker and one of the oldest contractors and builders in Oak Park.  Mr. Hogans was born in Norway in 1859 and immigrated to the United States at about 18 years of age. He married in his late 20’s and preceded to have six children with his wife, Emma.  In 1894 the Hogans family moved to Oak Park, where he established his 30 year career as a building contractor and builder. Along with partner, Henry W. Austin, the pair built an estimated 100 – 200 Oak Park and Chicago houses and apartment buildings. 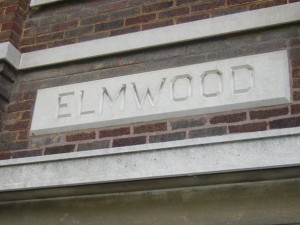 So back to the mystery. Looking at the Elmwood and Lake property you can detect several FLW design elements – the horizontal lines and broad, low-pitched roof – and we also know that designing apartment buildings was not beneath Frank’s architectural integrity simply because he needed the cash flow.

So, the question still unanswered, “Is our Elmwood and Lake building designed by famed architect Frank Lloyd Wright?”  “Did astute businessman, Henry Hogans use Mr. Wrights’ services?”  The answer to this architectural mystery is… a most definite maybe!