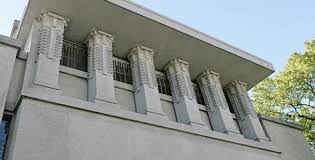 Today, more than other day, Oak Park is celebrating Frank Lloyd Wright.  Frank was born on this day, June 8th, 150 years ago. Wright has given the world, not only Oak Park, architecture that is still relevant, still contemporary, still inspirational. And now, more then ever, the world is intent on restoring and preserving the works of Frank Lloyd Wright for many years to come.

One such restoration project, said to be Frank’s favorite commission, is Oak Park’s own Unity Temple.

Wright’s Unity Temple is an architectural masterpiece, described by Wright himself as his “contribution to modern architecture.”  With its’ exposed concrete exterior and bipartite interior, Unity Temple has influenced many aspiring architects with its’ experimental and innovative style.

It is because of these innovative concepts that Unity Temple has earned much recognition.  In 1971 Unity temple was awarded United States National Historic Landmark status.  Architectural Record magazine conducted a poll in 1991 where Unity Temple was ranked sixth out of the 100 of the most significant buildings in the United States. Then, in 2014, the US Department of the Interior authorized the nomination of Unity Temple, along with ten other Frank Lloyd Wright buildings, for listing as a UNESCO World Heritage Site.

But with innovation and experimentation comes a price.  The 16 modern flat roofs were not designed with winter weather in mind.  The roofs, over time, leaked causing much interior damage.  Repairs were needed and the Unity Temple Restoration Foundation  (UTRF) began planning for the care, preservation and restoration of this architectural icon seventeen years ago. After two years and 25 million dollars the extensive, environmentally sensitive Unity Temple restoration is complete.  And timing couldn’t be more perfect to wish Wright a happy 150th!

A formal ribbon-cutting and open house are scheduled for June 17. Tours specifically about the restoration efforts will be a feature starting this July, 2017.