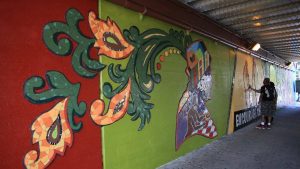 The Oak Park Area Arts Council’s Off The Wall Project has completed its’ second mural! Located under the Austin Blvd viaduct, adjacent to the Green Line “L” station this year’s second project completes the east side of the underpass and is titled, “Encourage Change”. This mural is the sister piece to the mural installed on the west side of the street last summer, titled “You are the Answer”.

How does such a big project take hold? It was through the efforts of master artist, Carolyn Elaine and her apprentice artists who took it upon themselves to interview and understand the thoughts and feelings of the people of the community as they were walking past or getting off the Green Line. They asked riders and local residents what would they like to see as an extension and compliment to last year’s west side mosaic. One of those interviews was with notable community activist and anti violence advocate, Andrew Holmes, as he was exiting the station. The apprentices approached Mr. Holmes and he felt that many of today’s problems are in part due to the “breakdown of the family structure”. From that statement the idea of “encouraging change” took root, and this year’s artistic mosaic focus became the need to “strengthen the family and mend the community”. 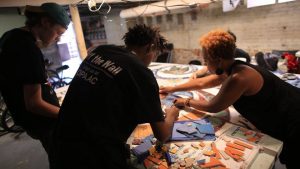 very proud of the Off The Wall Project.  “This program is a summer job, the standards are set high for each apprentice” stated Ms. Wilson White. Each apprentice is vetted prior to being hired to create and implement each summer’s projects. The apprentice hopefuls must provide art portfolios and fill out applications before being considered for the program. Once accepted expectations are clearly laid out before work begins.

At the ribbon cutting this past Saturday, Ms. Wilson White sang the praises of master artist, Carolyn Elaine and her assistant, Debra Phelps (Aikia), who co-led the program and mentored the apprentice teen artists, expressing how “marvelous” they (Carolyn and Aikia) are with the kids – “they are outstanding teaching artists.” During the weeks of creating and installing the two mosaics the process also included having the apprentices bring in their own original artwork a couple days out of each week and then sharing thoughts about their art, insights, life and dreams… with their peers. Camille couldn’t say enough about this year’s group of young artists, “They have become a great team. The kids from Oak Park and the kids from the Austin community – all working together to create magnificent public art!”

And finally, Ms. Wilson White wanted to make sure to thank Chicago Alderman Chris Taliaferro of the 29th ward whose supportive efforts were instrumental in making this year’s mosaic possible. 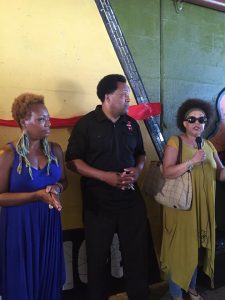 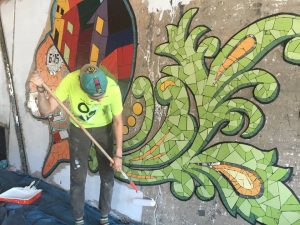 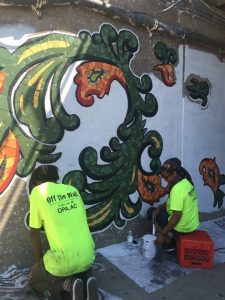