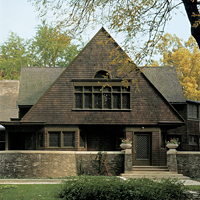 Having many vintage properties Oak Park Apartments makes it a mission to preserve the historical character of our buildings to ensure the continuing legacy of many a dedicated architect.  Of course, the most famous of these architects is Oak Park’s own Frank Lloyd Wright.

Frank Lloyd Wright is said to be “the greatest American architect of all time”. Frank was born, in 1867, raised in Spring Green and Madison Wisconsin respectively and for the first 20 years of his career, he lived and worked in Oak Park. His mother, Anna, a trained teacher stated upon his birth that he would grow up to build beautiful buildings. She purchased him a set of Fröbel blocks, which he credits for laying the groundwork of his architectural future.

FLW designed over 1,000 structures, over 500 of them were built – 30 of them in Oak Park, and many more in Chicago. The Frank Lloyd Wright Home and Studio in Oak Park was his home base and still remains open today for architectural tours.

nature through sensitive design from which the Prairie School of architecture originated.  Prairie style architecture is a style that is defined by “horizontal lines, flat or hipped roofs with broad overhanging eaves, windows grouped in horizontal bands, integration with the landscape, solid construction and craftsmanship”.

Additionally, FLW is known for developing the concept of the “Usonian home”. “Usonian Homes” were typically small, single-story L-shaped dwellings without a garage or much storage.  A strong visual connection between the interior and exterior spaces is an important characteristic of all Usonian homes.

Wright also often designed many of the interior elements of his buildings, such as the furniture, lighting and stained glass windows.