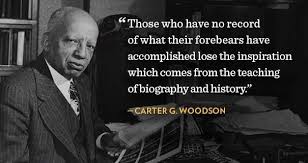 Carter G. Woodson, son of former slaves, valued education from an early age. Growing up poor Woodson was largely self-taught.  Unable to regularly attend school he mastered core subjects on his own until, at the age of 20, he entered high school and earned his diploma in under two years. Woodson then went on to both teach and become principal at Douglass High School, from where he had graduated.

Continuing on his educational journey Woodson graduated from Berea College with a Bachelor of Literature degree, the University of Chicago with both a Bachelor and Masters degree in history and lastly, from Harvard University with a Ph.d in history. He was the second African American to receive a doctorate degree from Harvard.

Dr. Woodson’s education in literature and history exposed him to some real truths about how history books ignored African American and other cultures. He stated, “if a race has no history, it has no worthwhile tradition, it becomes a negligible factor in the thought of the world, and it stands in danger of being exterminated.” It is at that point that he became determined to change how people thought about black history.

Co-founding the Association for the Study of African American Life and History (ASALH) in 1915, Woodson and others took charge of studying, celebrating and promoting African American history.  Woodson and the ASALH then worked to establish “Negro History Week” to “bring attention to his mission and help school systems coordinate their focus on the topic.”  The second week in February was chosen in respect to the birthdates of Abraham Lincoln (February 12th) and Fredrick Douglass (February 14th).

Over time the number of activities associated with “Negro History Week” grew too great to be contained to just one week so, in 1976, president Gerald Ford formally decreed February as Black History Month.

Dr. Woodson, along with many others who believe that education is a powerful tool to defeat racism, have changed the way people think and live.  And for that we are grateful.

The people of Oak Park choose this community, not just as a place to live, but as a way of life. Oak Park has committed itself to equality not only because it is legal, but because it is right; not only because equality is ethical, but because it is desirable for us and our children. Ours is a dynamic community that encourages the contributions of all citizens, regardless of race, color, ethnicity, ancestry, national origin, religion, age, sex, sexual orientation, gender identity or expression, marital and/or familial status, mental and/or physical impairment and/or disability, military status, economic class, political affiliation, or any of the other distinguishing characteristics that all too often divide people in society. – Oak Park Diversity Statement